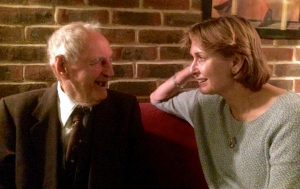 Judith with Albert Tillen, at the Red House in Newbury city (Hampton Red).

Thanks to the Liberal Democrats in government, pensions are now tied back to the cost of living. The link was first broken by Margaret Thatcher, back in the eighties, and never restored during the Labour years.  Now Steve Webb and his team have pushed pensions back towards an even keel. If we are in government again, we will legislate to fix these changes in law.

Neither Conservatives nor Labour would have taken these steps. The Lib Dems have worked hard in this government to make sure our stronger economy has funded a fairer society than would have happened under a Tory government, and we will do the same again.

We will always fight the ideological Tory cuts that go far beyond the balancing of the national budget.